Here we take a deep-dive into the modules of the NDMG-d pipeline. We will explain algorithm and parameter choices that were implemented at each step and the justification for why they were used over alternatives. 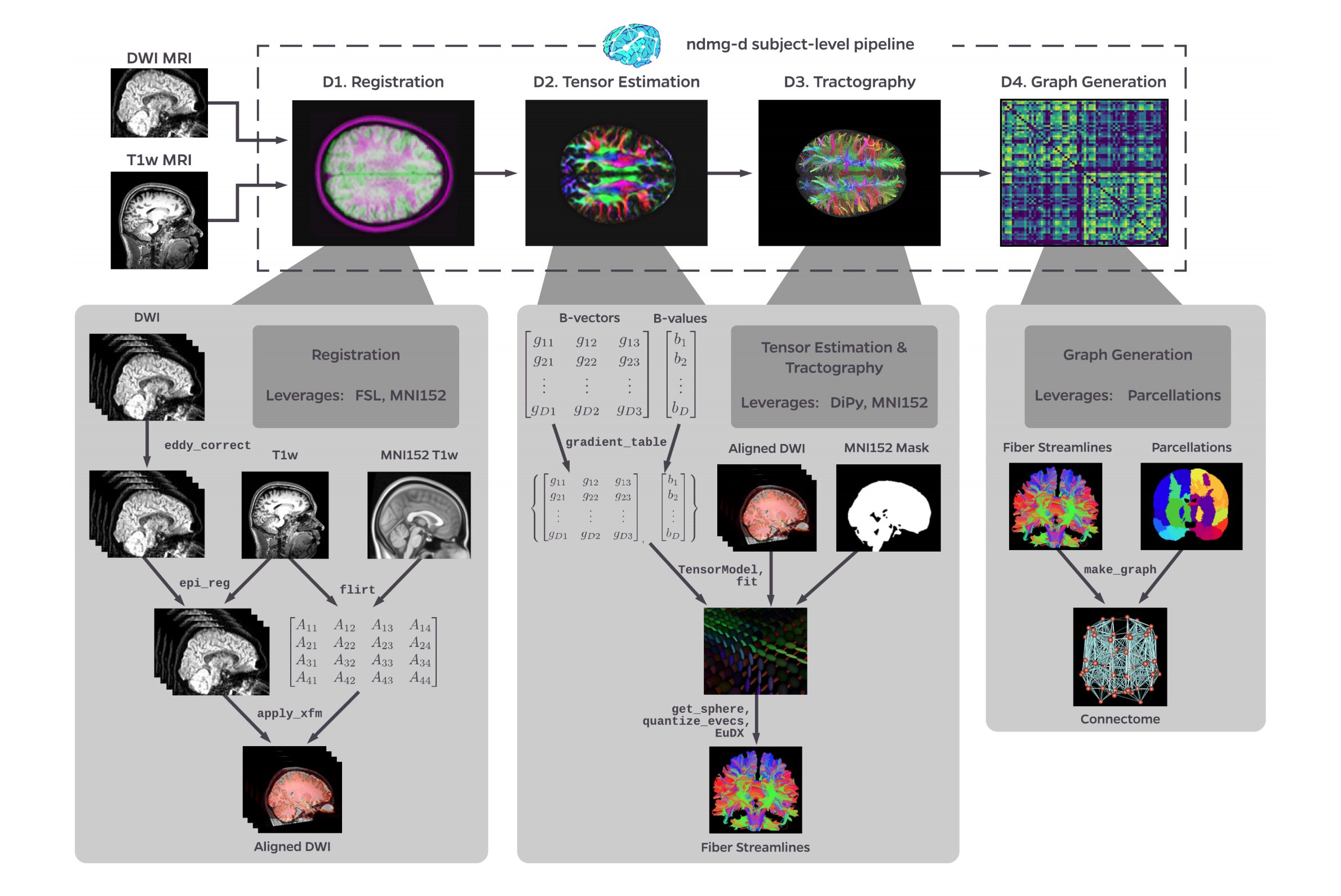 Figure S1: NDMG-d detailed pipeline. The NDMG-d pipeline consists of 4 main steps: Registration (D1), Tensor Estimation (D2), Tractography (D3), and Graph Generation (D4). Each of these sections leverages publicely available tools and data to robustly produce the desired derivative of each step. Alongside derivative production, NDMG produces QA figures at each stage, as can be seen in D1-4, that enable qualitative evaluation of the pipeline’s performance.

Registration in NDMG leverages FSL and the Nilearn Python package. NDMG uses linear registrations because non-linear methods had higher variability across studies and increased the time requirements of the pipeline dramatically.

The first step in the registration module is eddy-current correction and dMRI self-alignment to the volume-stack’s BO volume (Figure S1). NDMG uses FSL’s eddy_correct, rather than the newer eddy function, because eddy requires substantially longer to run or relies on GPY acceleration, which would reduce the accessibility of NDMG. Once the dMRI data is self-aligned, it is aligned to the same-individual T1w image through FSL’s epi_reg mini-pipeline. This tool performs a linear alignment between each image in the dMRI volume-stack and the T1w volume. The T1w volume is then aligned to the MNI152 template using linear registration computed by FSL’s flirt. This alignment is computed using the 1 millimeter (mm) MNI152 atlas, to enable higher freedom in terms of the parcellations that may be used, such as near-voxelwise parcellations that have been generated at 1 mm. FSL’s non-linear registration, fnirt, is not used in NDMG as the performance was found to vary significantly based on the collection protocol of the T1w images, often resulting in either slightly improved or significantly deteriorated performance.

The transform mapping the T1w volume to the template is then applied to the dMRI image stack, resulting in the dMRI image being aligned to the MNI152 template in stereotaxic-coordinate space. However, while flirt aligns the images in stereotaxic space, it does not guarantee an overlap of the data in voxelspace. Uisng Nilearn’s resample, NDMG ensures that images are aligned in both voxel- and stereotaxic-coordinates so that all analyses can be performed equivalently either with or without considering the image affine-transforms mapping the data matrix to the real-world coordinates. 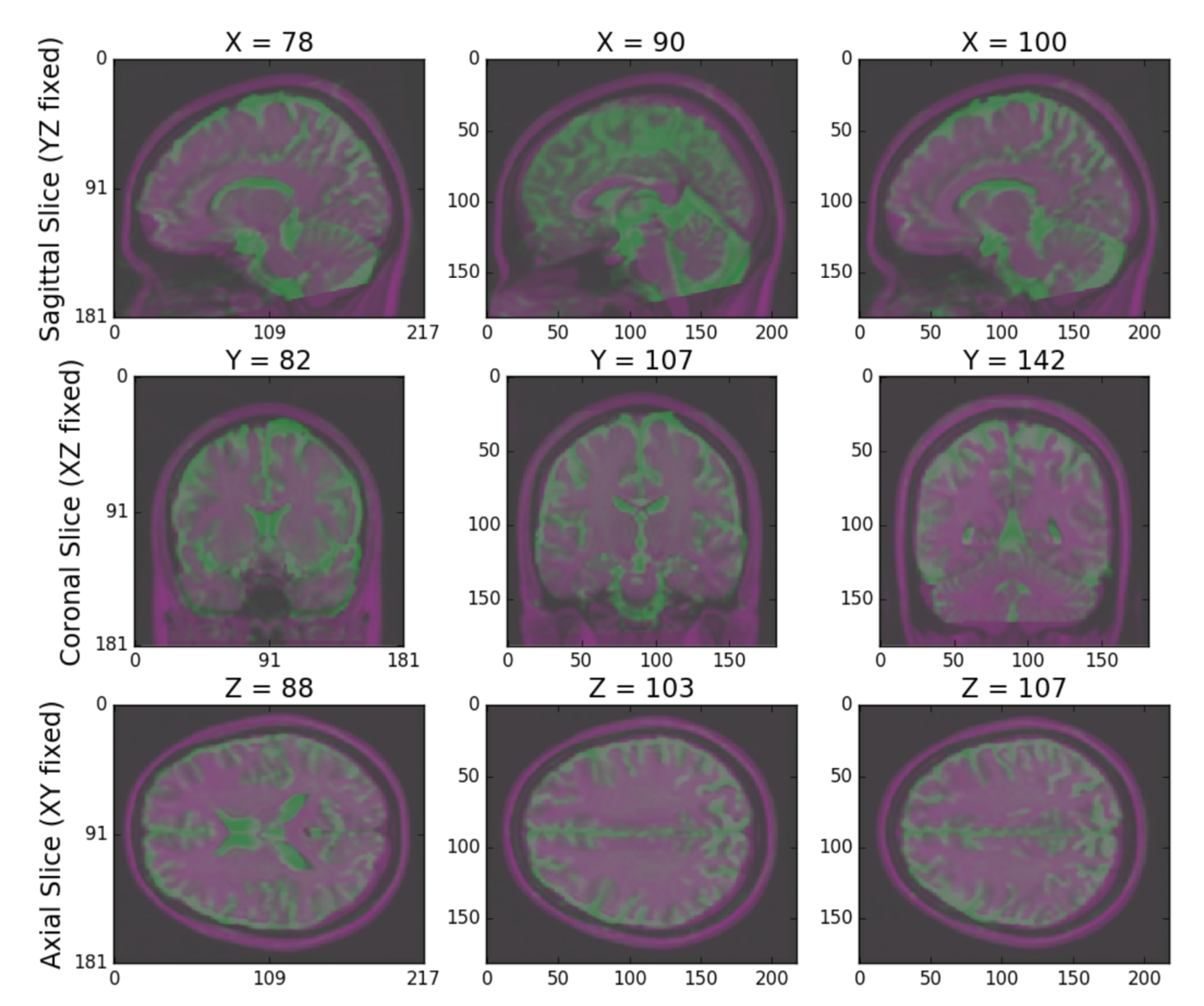 While high-dimensional diffusion models, such as orientation distribution functions (ODFs) or q-ball, enable reconstruction of crossing fibers and complex fiber trajectories, these methods are designed for images with a large number of diffusion volumes/directions for a given image. Because NDMG is designed to be robust across a wide range of dMRI studies, including diffusion tensor imaging, NDMG uses a lower-dimensional tensor model. The model, described in detail on DiPy’s website, computes a 6-component tensor for each voxel in the image. This reduces the dMRI image stack to a single 6-dimensional image that can be used for tractography. NDMG generates a QA plot showing slices of the FA map derived from the tensors in nine panels, as below (Figure S3) 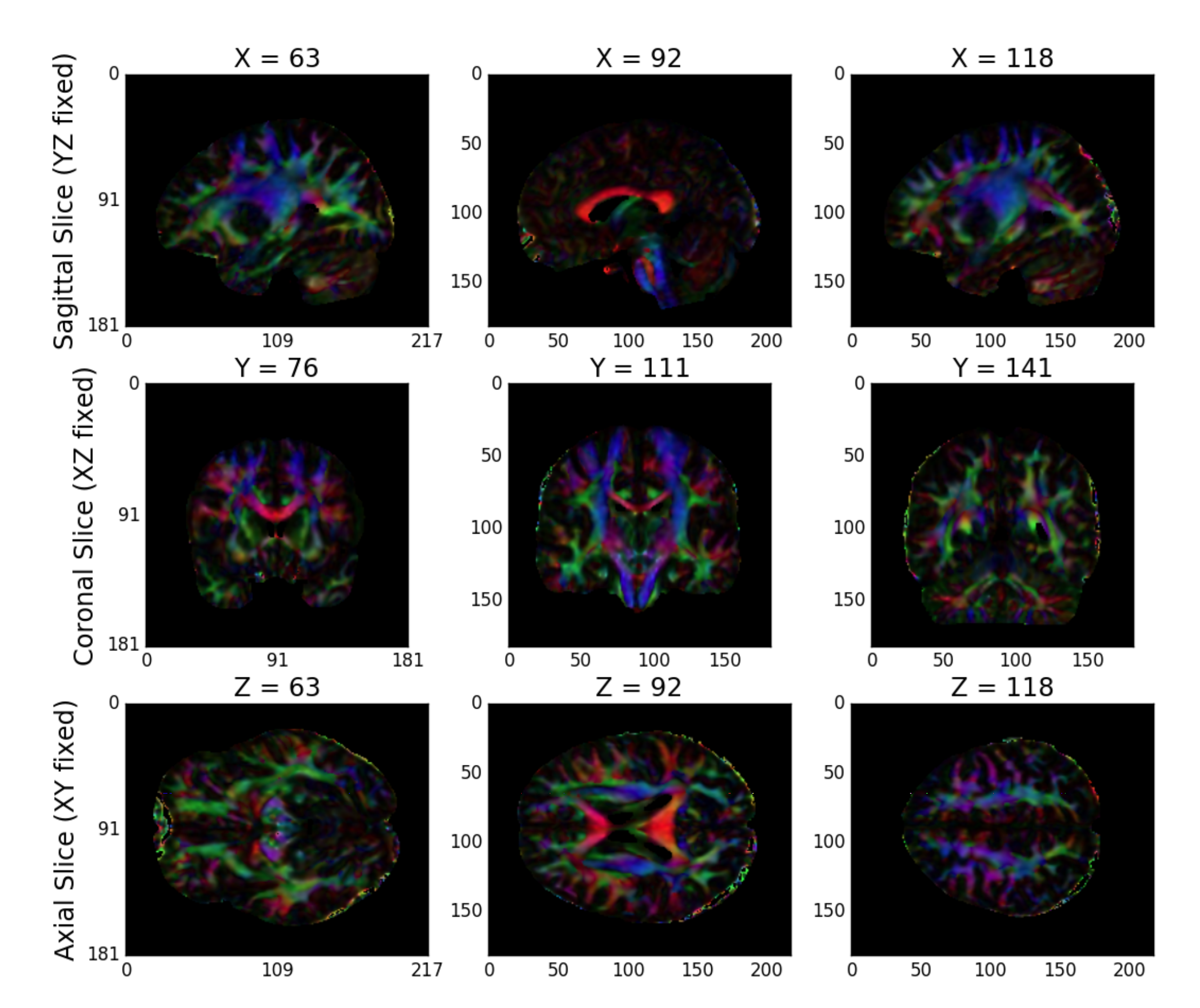 NDMG uses DiPy’s deterministic tractography algorithm, EuDX. Integration of tensor estimation and tractography methods is minimally complex with this tractography method, as it has been designed to operate on the tensors produced by DiPy in the previous step. Probabilistic tractography would be significantly more computationally expensive, and it remains unclear how well it would perform on data with a small number of diffusion directions. The QA figure for tractography shows a subset of the resolved streamlines in an axial projection of the brain mask with the fibers contained therein (Figure S4). This QA figure allows the user to verify, for example, that streamlines are following expected patterns within the brain and do not leave the boundary of the mask.

NDMG uses the fiber streamlines to generate connectomes across multiple parcellations. Graphs are formed by contracting voxels into graph vertices depending on spatial, anatomical, or functional similarity. Given a parcellation with vertices \(V\) and a corresponding mapping \(P(v_i)\) indicating the voxels within a region \(i\), we contract our fiber streamlines as follows. To form a graph \(G(V, E, w)\), we know that \(V = \left\{v_i\right\}_{i=1}^N\) is the set of all unique vertices in our parcellation. \(E = V \times V\) is a collection of possible edges between different vertex regions. \(w : V \times V \to \mathbb{Z}_+\) is a weighting function for each edge in the graph. Here, \(w(v_i,v_j) = \sum_{w \in P(v_j)}{\sum_{w \in P(v_i)}\mathbb{i}\left\{F_{u,w}\right\}}\) where \(F_{u,w}\) is true if a fiber tract exists between voxels \(u\) and \(w\), and false if there is no fiber tract between voxels \(u\) and \(w\).

The connectomes generated are graph objects, with nodes in the graph representing regions of interest (ROIs) and edges representing connectivity via fibers. An undirected edge is added to the graph for each pair of ROIs a given streamline passes through. Edges are undirected because dMRI data lacks direction information. Edge weight is the number of streamlines which pass through a given pair of regions. NDMG uses 24 parcellations, including all standard public dMRI parcellations known by the authors. Users may run NDMG using any additional parcellation defined in MNI152 space simply by providing access to it on the command-line. To package an additional parcellation with NDMG, please contact the maintainers. The QA for graph generation depicts a number of graph statistics for each of the parcellation schemes. We typically generate this figure at the population level, as depicted in Figure S4.